by libbycataldi under Faith, Hope 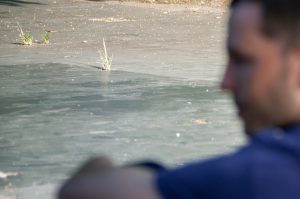 A young man explained when he decided to change his life: I remember when I hit bottom: I was drunk, high, and sitting in my car in a field looking at a silver handgun that my older brother gave me for protection since he was just involved in a large drug deal that went bad a couple days before. It would have been so easy that night to pull the trigger and put an end to things, but I was not strong enough. I thought about it many times but I could not do it. I was so close. I was so tired. But I knew someone still believed in me.

My reflection: The young man who told me this story said that the person who believed in him was the mother of a close friend. Despite how tired and broken he felt by his addiction, this mother’s steady and persistent hope became his lifeline.

Today’s Promise: For those suffering from addiction, the knowledge that someone still believes in them can make a difference. When they are without hope, the feeling that someone, somewhere, hasn’t given up on them offers strength. Today, I’ll stay close to those I love, but I must stay out of the chaos of their choices. I will pray and believe that in time they’ll make the decision to come home.

Good Morning Libby: I’ve been at hopeful and hopeless soooo many times! After 20 years of my two AS’s disease, I am continually learning how to Let Go, Let God, lovingly detach, remain diligent in prayer and hope, yet knowing I have to always step away from their chaos and choices while still encouraging their progress towards sobriety. Wow, it takes alot of energy and fortitude, but the peace it beings is well worth the work we have to do! I think of you, Jeff and your family so often, especially when I’m having a challenging day. Please know the strength you have given others with you and Jeff’s journey.
Sending blessings and caring, Rae Lynn

Dear Rae Lynn, Your words are full of wisdom. Yes, I understand the concept of ‘continually’ learning. Me, too! We need to constantly remind ourselves to Let God and Let God, to lovingly detach, to remain diligent in prayer and hope, and yes we must step away from the chose of their choices as they make their way to sobriety. Even though Jeff is healthy today, there are always issues in a family, and your words inspire me and remind me that we are living life’s journey, one day at a time. With love to you. L

Addiction does not have the power to stop the love of a parent from reaching their child. It is that love that creates hope within the child. The hope lingers in the child’s very soul waiting for that moment of spiritual transformation. It is hope within the child that eventually ignites long term recovery. Ask any recovering addict and they will confirm two things, (1) I found recovery when my family stopped enabling and (2) I knew my family loved me and would support my recovery. It is so difficult for we, as parents, to understand we need as much help as our addicted child. We need a 12 step program that we attend regularly and securing a sponsor is critical! We need to educate ourselves fully on the disease of addiction accepting it is a primary disease, a mental illness. A critical part of our own recovery is securing a properly credentialed and experienced alcohol/drug counselor. And lastly the foundation of our own recovery is drawing close to the God of our understanding. Recovery is a spiritual journey and it is a lifelong commitment.

Pat, As always, I thank you for sharing your wisdom. I love, “The hope lingers in the child’s very soul waiting for that moment of spiritual transformation.” You’re right about 1 and 2 above, and my son has said the same thing – boundaries and staying close. Thanks, too, for combining this message with help for the parent. We need, too, need advice, support, and good counsel. Your summation hits the mark: “Recovery is a spiritual journey and a lifelong commitment.” Thanks, Pat.

Love all the wonderful comments. It’s been a rough week and you all have inspired me ❤️

We’ll all stay close, Karen, in love and prayers. You inspire us. Thanks for reaching out.

I like the idea of staying close ❤️. Somehow it fills my soul with much needed strength. I am seeing red flags in my son and try to put them aside in my head because I can’t control anything if he has relapsed. Then after a long good day the anxiety hits and I call two dear Alanon friends. It helps but..in my mind the red flags show up. My mom mentions “ something seems a little off” and “ he was in the bathroom a lot “ “ he’s constipated. I have decided to detach a bit but it’s hard. His first rehab was in 2014 and I had hopes that this 5 months of sobriety would be it. Maybe I’m wrong and he’s clean. That said, all I can do is pray and go on with my day. Thank you for giving me the space to share. Hopefully these words will help me let go in a place where there is understanding. Yes, let’s stay close.

Dear Karen, Stay Close gave me peace, too. With these words, I had a path to follow — Stay Close, but out of the chaos of my son’s addiction. Your words bring back lots of memories. Yes, red flags consumed me and I wondered if my son was sober or not. I, too, reached out to Alanon friends who could understand without judgment. I constantly searched my son’s eyes looking for a clue, but the problem was that he knew ‘that’ look and it created more distance between us. When I finally surrendered and let him know that I loved him, but I couldn’t carry him or his addiction, I found a bit of peace. Please know that you are not alone in ruminating over red flags. I think we all have done it and even continue. I’ll stay close in love and prayer. As Dr MacAfee once told me, “Be patient with yourself. You’ve been vigilant a long time.”

It is going on 15 years now. As a parent of an addict and alcoholic, I remain hopeful that one day, my daughter will diligently work her program for a sustainable and healthy life. She is currently in another rehab center choosing to remain out of touch with me. Her decision is hard to accept but I continue to have hope, patience, and love for her. A loving Father….

Dear Al, I’m sorry that she’s out of touch, but I understand. You love her and she knows it. There at times when, I think, that’s all we can do. If I could have crawled into my son’s body and recovered for him, I would have, but it’s impossible. I had to step back and give him the dignity of finding recovery when he was ready. You are a loving father. God bless you and your daughter. I’ll keep you both in my strong prayers.

My adult daughter has been a substance abuser since high school. Alcohol, depression meds mixed with alcohol and now drugs. She is 35 and is now recovering from perforated colon surgery from too many opioids. Her live in boyfriend is also a severe alcoholic and has sold drugs which now he has a felony from. I spent many years bailing her out financially- which now i have learned i were enabling her. I no longer give her any financial assistance. I have tried very hard to stay out of her choices in life. I love her so very much, but I’m so conflicted. How do I have any kind of relationship with her? She knows how I feel about her boyfriend, she refuses go into any kind of rehab. I have been going to Al Anon and leaning on the steps and traditions. The doctors and social workers at the hospital have told me that if her lifestyle doesn’t change, I will lose her. What do I do? What can/should I try to say to her?

Dear Norma, I understand the conflict you feel. I, too, enable Jeff almost to death. When the recovering alcoholic in Italy told me, “Stay Close, but don’t give him money…for anything,” this was advice I could follow. It took me 14 years to learn how best to love my addicted son. Take a look at the video on our website: libbycataldi.com Go to the tab that says “books/video” and it’s the first video halfway down the page. Listen to Jeff’s words – they are filled with wisdom. I hope this brings you some comfort. My love to you. I’ll stay close in prayer.