WHY DO WE HURT THE ONES WE LOVE MOST? 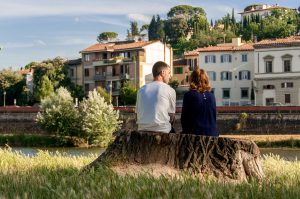 A mom wrote to me: I finally found the strength to know that no amount of money thrown at the disease of addiction will help it. So we said a gentle “no” to his pleas. We got the hate and the hurt and the anger back in spades, the addiction really reared its ugly head. Our son’s deep pain directed towards the ones he loves most.

My reflection: During the years of my son’s active using, he became a master of manipulation, exploitation, and betrayal. When I refused to give him money, when I didn’t allow him to come home, or when I wouldn’t bail him out of jail, he became abusive. This is the pathology of addiction. My son and I lived this dance for years, until I realized I was part of the problem.

Today’s Promise to consider: When we parents put a roadblock between the addict and what he wants, this is a major threat to him. In addition, we stand as a constant reminder to our children that the life they are living is rife with pain and harm. Today, I will not allow addiction to isolate and separate me from my loved one. I will offer roads to recovery, not more money or bailouts.

It’s vital to understand how Addiction operates. What are its goals? Where are we, as parents, involved? It is complicated. Working with a licensed alcohol/drug counselor and attending parent support groups can help us make the best choices to help our children find their recovery sooner rather than later.

Dear Pat, Addiction is complicated and confounding. I join you in pray that our children find their way to recovery sooner rather than later. Thanks for sharing your wisdom.

Libby, wasn’t it by saying “no” at times like these that helped Jeff to turn to recovery?

Oh, yes. In fact, once, when Jeff and I were speaking in front on a large group, someone asked him, “If your mother had quit being ‘Bank of America,’ would you have found recovery sooner?” Jeff answered, “Addicts need money and we can find it in a lot of places, but my mother made it a whole lot easier.” When I finally learned to ‘stay close, but out of the chaos’ of my son’s addiction, HE picked up his cross and made the choice to change his life. xo

I remember once a long long time ago saying no when asked for money and my son threatening to commit suicide and because he had other difficulties including depression even before drugs— having to say I love you that would make me sadder than sad but it is your choice– was VERY tough That was a VERY long night. I remember one time calling the police and telling them where he was so he would be picked up and put in jail. BUT! My son found times and years of recovery and was in active recovery when trying to come off methadone he relapsed and his body gave out.

We got to see his shiny self. His loving self . His real self beneath the disease. We grieve yes, every day ,and will but I know we had him at least 15 years longer than we might have. Because of learning about addiction and ourselves and how to respond by staying close but staying out of the chaos during years in “the lost and found”, deciding when to trust our guts and heart and trust his journey was his — we had so many happy times in his last years and there was always love. And hope. And coping skills learned ! And faith deepened. We were not perfect by any stretch and we keep learning even now, yes even now, but we kept praying and that mantra of Libby’s led us into the light time and again. That is what comforts me the most now. We learned so much from Libby and this community and we are ever grateful. So I wrote after seeing today’s reflection to tell anyone who fears the worst — the loss of your child—the worst is not death when you have watched someone struggle so and know they are at peace — the worst would have been seeing my son go from darkness of disease to death and blaming ourselves and only having negative last memories. We had good good memories to cherish. We had recovery time. I wish that for everyone. Love love love. We stayed together and prayed together. Doing the wisest and most loving thing always takes courage. Do not let the disease swallow your hope or hijack your life. In the end, love is ALL. Hope rules. I pray for all of us in this community no matter where the journey has taken us. I know my life has been shaped by loving my sons and my tears will keep coming but I have faith there will be a time we are together again. I want to tell you the love and advice I found here means I got to cherish and know the Godlight that was in my son. A good soul. Yes , I saw that saint in the making. Faith, love, hope. Courage. Prayers. Gratitude to Libby, Jeff, Jeremy.

So much of what you write touches my very soul. You lost your son. There is no greater pain. I’m deeply, deeply sorry.

Many of your thoughts are full of wisdom: “Because of learning about addiction and ourselves and how to respond by staying close but staying out of the chaos during years in “the lost and found”, deciding when to trust our guts and heart and trust his journey was his — we had so many happy times in his last years and there was always love. ” Yes, deciding when to trust our guts and hearts is important. There were many times when I wanted someone to tell me what to do, when to give in, and when to stay strong. No one can do that for us. We parents need to educate ourselves, but also trust our gut and be guided by love.

This thought will stay with me: “…the worst is not death when you have watched someone struggle so and know they are at peace — the worst would have been seeing my son go from darkness of disease to death and blaming ourselves and only having negative last memories.” Dr. MacAfee told me the same thing – that love is the answer and that we, as parents, do everything we can until we can’t. At the end of Jeff’s addiction, I told him how much I loved him, but that I surrendered to the addiction. I could do no more.

You will forever cherish the Godlight that was/is your son. I’ll stay close in love.

You are ever close and have been and because of you and others and the hard work I am sad but strong. I ma not at peace and will work towards that . One day at a time. Sometimes, one breath at a time. Total surrender. xoxox

Pls clarify for me what you mean by offering the road to recovery. I would really love to offer this

The best way to answer your question is for you to read the epilogue of our book written by Dr. Patrick MacAfee. Dr. MacAfee was (he has since died) an expert when working with addicts. Below is a portion of what he wrote about your question. For me, Al-Anon was a huge help. I learned to stay close, but out of the chaos of my son’s addiction. For example, at the end of his 14-year run and when he called for money, I told him, “I love you, but I can’t give you money. When I had breast cancer, I had to choose to live. No one can make you cut two breasts off your body. You are going to die unless YOU choose to live. Fight, Jeff, fight.” Within two days, he put himself into a recovering community.

“If you are dealing with this problem, offer the addict roads to recovery, not more money or bail-outs. It’s the fear of watching a loved one failing that is most frightening, not realizing that the natural extension of love and caring may only enable the condition and unintentionally not reflect reality.
The initial step is to begin to name and define what is going on. Al-anon Family Groups is a fine place to begin. Family groups are available in most areas. In facilitating multi-family groups the emphasis is upon safety, trust, the commonality of the problem, and how families individually deal with it. Families share how they inadvertently enabled a situation, perpetuating the issues they intended to solve. The family groups emphasize self-care, talking with other families, and avoiding isolation. As addicts become increasingly drawn into addiction, their families get drawn into the dysfunction.
This is a fairly accurate and common dynamic, but the more complete picture shows the family polarizing and moving into dichotomous (either/or and black/white) thinking. The addict becomes the major focus for some family members. For others, the addict becomes a target for rejection, distain, and fury.
The ideal family group focuses upon the commonality of the problem. This commonality attempts to deal with it, reframing what is failure and what is success. Characteristically, family groups run themselves, mentoring each other. The empathy and understanding that families have toward each other is a heart-felt endeavor, breaking the isolation. Hope is the matrix. Intervention with family members can occur at any time along the continuum of the developing problem of addiction.”