by libbycataldi under meditation, Recovery, Relapse 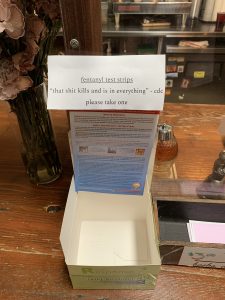 My son sent me this picture from a local coffee shop in Los Angeles. Fentanyl is a synthetic opioid that is 80 – 100 times stronger than morphine. Fentanyl test strips can be used to detect the presence of fentanyl in a wide range of street drugs. You don’t need to be a medical professional to run the tests. The user simply dips the strip into water containing a small amount of drug residue and waits a few minutes for the result. The appearance of a single line signifies the presence of fentanyl, and two red lines signify its absence. The strips are inexpensive ($1 each), can be carried in a purse or wallet, and are an evidenced-based method of averting drug overdoses.

My reflection: Most fentanyl-related overdoses and deaths, according to the National Institutes of Health, are linked to fentanyl sold illegally for its opiate-like effect. It is often mixed with heroin, cocaine and Ecstasy  – with or without the user’s knowledge – to increase the drug’s impact, often to tragic effect.

Today’s Promise to consider: Overdose deaths involving Fentanyl have quadrupled. Street drugs are awash with it – sold alone as a powder or added to a wide range of other narcotics. The Fentanyl Test Strip Pilot Program was initiated in San Francisco in August 2017 in response to the rapid increase in Fentanyl deaths. What makes it so effective is that it puts control in users’ hands allowing them to test the toxicity of the drugs they’re about to ingest. Today, let’s not only pray that this program expands around the world, but let’s work to make the strips easily available and widely distributed. This can help save many, many lives.

Thank you Libby! Very valuable information that will save lives.

Thanks, Pat. I’m a little disheartened because this post has the least number of reactions, yet I believe it’s one of the most important. These strips should be available everywhere. I agree with you — they can and will save lives. Thanks for the support.

My son just died from fentanyl laced heroin. I’m overwhelmed with grief. Chicago is selling it all over.
It’s good to know these strips are out there. But how do people know how to get these. To late for us

Dearest Terri, I’m deeply sorry. Your pain is the worst. You’re right that fentanyl is everywhere and laced into everything. We have lifesaving methods to help our suffering loved ones, but they are not readily available. Things MUST change. My love to you. I’ll stay close in love and prayer.

Thank you so very much Libby. I need to find a way to help others suffering from the madness. I want to make a difference. Kyle wanted so much to live a normal life. Addiction took it all away.
I love your Thursday emails. Thank you

Dear Terri, My heart is heavy for you. I’m deeply sorry that you lost Kyle to addiction’s grasp. Addiction wants to destroy everyone, and Fentanyl is doing just that. Please know that I’ll stay close in love and prayer. My love to you.