by libbycataldi under Acceptance, Recovery 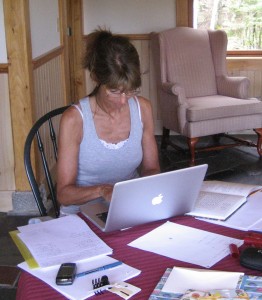 Father Dan at Camaldoli Hermitage told a story: about a nun, who was being faced with an unpopular decision in her community and, therefore, afraid to voice her opinion. Her recurring dreams played out this fear.

My reflection: Father Dan explained that our dreams give us access to our unconscious and play out the conflicts that we experience in our everyday life. In the dream sequence above, when the nun finally found the courage to speak out in community, her tormentor melted away. When Jeff was in active addiction, terror plagued me and my dreams played out those fears, until I, too, faced the demon.

Today’s Promise to consider: Finding our voice is an important part of our recovery and maintaining health. There are times when I’ve been afraid to voice my opinion for fear of rejection or an angry response. Holding my voice back feels like a cancer slowing growing inside me. Today, I will say what I need to say in love and with respect.

This meditation couldn’t have come at a better time for me. Just the other night, my husband had to wake me from a night terror because I was thrashing and yelling out. What I remembered from the nightmare, like the nun, was that a monster was behind me, following me, trying to harm me.

Our dreams do play out the conflicts we face from day to day. In my case, I had to make a decision whether or not to have a back fusion. When I decided not to go forth with the surgery, and to just have epidural back injections, the night terrors stopped.

I’ve had night terrors before, and when I wake up from them, I pray. I pray the rosary until I can fall asleep again. I know prayer may not help other people, but it helps my mind to get back to normal.

We all have our demons who torment us. That is life. The only thing we can do for ourselves, is find what is best for ourselves, whatever it may be, and embrace it.

Thank you, Libby, for yet another insightful meditation.

I feel like you are speaking to me directly tonight. I’ve been plagued with nightmares recently. I do not always remember them, but they disrupt my sleep constantly.

I was being silent for too long and I believe I needed to find my voice, which I did a few weeks ago. I just needed to ask my son how he is. I was pleasantly surprised with his willingness to talk. For today I believe my son is doing well and 6 months into recovery.

I wrote here a few months back that I could not bring myself to finish Stay Close. I am happy to say that I finished it days later. I recommended it to a new friend just tonight who has been dealing with her sons addiction also.

I hope all is well in your life.

When my son was in active addiction, and afterward, I was also silent for too long. I had to finally write to him, call him and talk to him. This happened several times and I was always glad when I spoke or wrote to him. He would always call me or write back to me. He loved me so much, and when I would cast him out of my life when he was using, I always felt guilty. And, the guilt plagued my life.

We should never stifle our voice. It’s not only dangerous to your health, it cripples us mentally.

Linda – I am happy your son is doing well and in recovery. I pray that he continues his journey in good health.

Many of us have lost our voices through the effects of suffering with this disease. As Barbara writes, it cripples us mentally. I also think it takes its toll physically. The body can only withstand so much stress and misery.

My love to you all. Barbara, you are important to me.

Good morning, Libby,
I had the pleasure and privilege of attending the program at which you and your son recently spoke when you returned to Calvert County, MD. Thank you. It was very motivating and inspiring. I applaud you and your son, as it took great courage. Your actions give others the strength and tenacity to persevere through the extreme adversities one faces when living through alcohol and substance abuse.

My son relapsed in April, came to me asking for help in July and went to a two week rehab in August. Yes, two weeks, because that’s all his insurance would cover. He has been substance use free since then and living with me while waiting for a bed in a recovery house. He is on Medicaid due to the fact that he is currently unemployed. He has to rely on public transportation due to the fact that when he relapsed, he totaled his car. Fortunately, he, nor anyone else, was seriously injured. Although he’s been actively job hunting, until he gets a bed and knows where he is going to be living, he is unable to accept full-time employment. To show his commitment, he has been following the prescribed plan, going to AA/NA meetings, exercising and has taken a part-time job. My fear is that if he doesn’t soon find a bed he is going to lose patience and hope and relapse. I realize what will be, will be.

Here in the US the demand for inpatient rehab services has become overwhelming and continues to grow. Though I’m not a counselor, I work in MH/SA administration and see that our system in the US, at least in MD, falls short – to say the least – of providing consumers with the services and tools needed to prevent recidivism and encourage success. It’s very frustrating and maddening to watch, especially now that I’m experiencing it firsthand. You mentioned that in Italy there are non-profit, religious organizations that offer 3 – 5 year programs. You also mentioned several places in the US that offer similar programs. I would like to learn more about these programs. Would you please provide their names.

I apologize if this is not the place for this type of communication, but I was unable to find any other means of reaching you.

Thank you for your time and best wishes.

Thanks for reaching out to me. All you write is true and the situation with insurance, rehab centers and relapse is maddening.

Comunità Cenacolo http://www.comunitacenacolo.org is the Italian community that has several homes in the US. They require a 3 – 5 year commitment, but they also have a recovery rate of 83%. Jeff never went to Comunità Cenacolo or San Patrignano (this community is only in Italy), but I have known several American kids who have entered each one and are sober and healthy today. These are both free.

Good luck. Let’s keep each other and our families in our prayers.

Thank you so much for responding. Until this experience, I always thought I was a patient person, I am now learning the true meaning of the word. Un giorno alla volta. Peace be with you and your family. My prayers are with every individual experiencing substance abuse and their loved ones.

Yes, one day at a time. Patience is something I’m working to achieve. I pray that God gives me the grace. Love to you.